Just as 10G Ethernet is going through widespread deployment in the datacenter, the discussion has now shifted to even higher speed interconnects—namely 40G and 100G Ethernet.
Background
In July 2006, the IEEE Higher Speed Study Group was formed to look into the next evolutionary step after 10 Gigabit Ethernet. In the past, Ethernet speeds would increase by a factor of 10. However, the next generation jump from 10 Gigabit to 100 Gigabit has proven to be a technological challenge. Some within the IEEE group felt that 100 Gig made sense for Telco’s and other backbone network providers, but not as a next step for servers—it was simply more speed and expense than needed for the near future. While the IEEE initially planned to standardize only on 100G Ethernet as the next step after 10G, server vendors initiated a push in early 2007 to include 40G Ethernet in the standard, with the rationale that work used to develop 40G Ethernet will be able to be leveraged into 100G1, and that 40G would be a better match for server I/O around 2010 than 100G.
In July 2007, the IEEE 802.3ba study group was named, and it is the first standard to include two different Ethernet speeds—the 40 Gbps rate for local server applications, and the 100 Gbps rate for internet backbone–to serve both market needs. In December 2007 the official 802.3ba task force was formed to begin work on the new standard, which is expected to be ratified by 2009 or 2010. 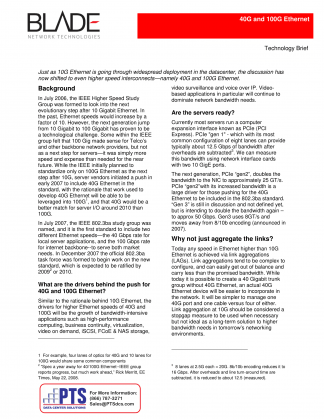