Clipper Group White Paper: Is your IT Infrastructure Ready for the Future? Prepping for a 10GbE Future

The success, in fact proliferation, of the automobile in the 20th Century has been credited at various times to the success of the internal combustion engine and a variety of technological innovations. No innovation, however, had as big an impact on the success of the automobile as Henry Ford’s assembly line, which brought the price of the automobile down to a level that the middle class could afford. Unfortunately, breakdowns were frequent, fuel was difficult to obtain, and roads suitable for travelling were scarce. Until a network of gas stations was put in place, along with a suitable web of paved city roads and interstate highways, the intrepid driver would have to carry spare fuel, as well as spare parts, and know what to do with them, in order to be able to reach his destination. Without these extras, the automobile would not have achieved the rapid success that it did. In fact, the automobile infrastructure was as responsible, if not more so, for the success of the modern automobile as any single technical innovation. The future success of electric cars will depend upon the accessibility of recharging stations to supplement the gas pump at service stations around the world.
A similar infrastructure, an IT infrastructure will be the key to the success of the enterprise data center in the years to come. Because of the poor utilization of existing single-core microprocessor servers, the IT staff of the typical data center has embarked on a journey of consolidation and virtualization to reduce server sprawl, simplify data center complexity, and reduce the total cost of ownership (TCO) of the IT infrastructure. With the availability of the latest x86 microprocessor technology, e.g., the Intel Xeon 5500 (née Nehalem), the data center has the quad-core and multi-threaded processing power to consolidate multiple mission- and business-critical applications on a single dual-socket server. Unfortunately, consolidating multiple applications on a single platform can put an extremely high workload onto the I/O infrastructure of the server network. With an existing architecture comprised of 1GbE ports either built into the motherboard or added through PCI-e adapters, an I/O bottleneck could quickly bring missioncritical applications to their knees, destroying whatever TCO gains were achieved through consolidation.
Today’s IT staff must be concerned with the enterprise scalability of the I/O infrastructure, its bandwidth, its I/O virtualization capabilities, and its flexibility to support all of the servers and storage devices already deployed throughout the enterprise, as well as any new devices planned for the future. This bulletin discusses the need for and the advantages of deploying a unified 10GbE for the IT infrastructure. If your data center is going to need higher throughput in the years to come, and most will, please read on to learn how you can start to prepare now. 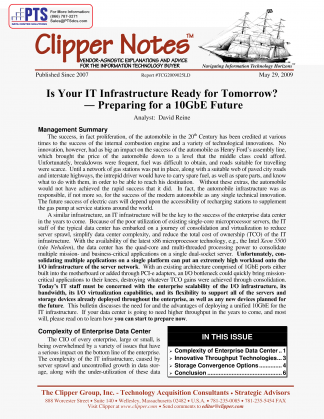 You're viewing: Clipper Group White Paper: Is your IT Infrastructure Ready for the Future? Prepping for a 10GbE Future $0.00
Add to cart